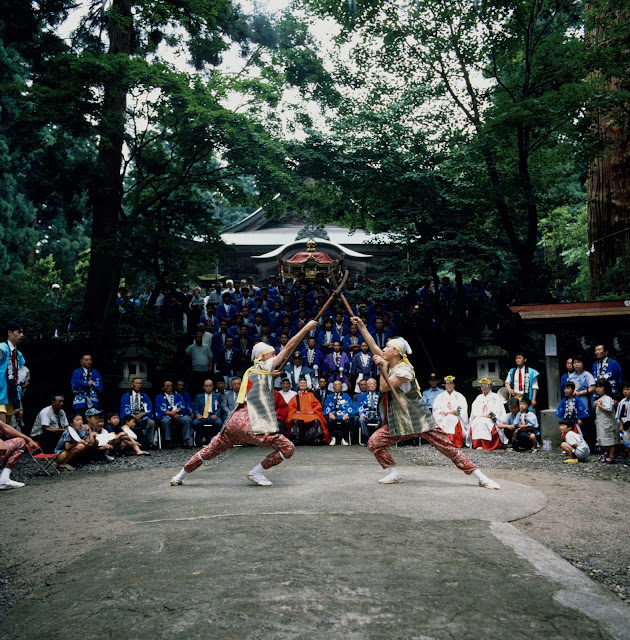 (C)Niigata-ken Professional Photographers Society
Mt.Myoko Sekiyama shrine fire festival.
This unique festival is held on every July.(the third Saturday and Sunday)
We have countless Shinto rituals all over Japan especially in summer season. 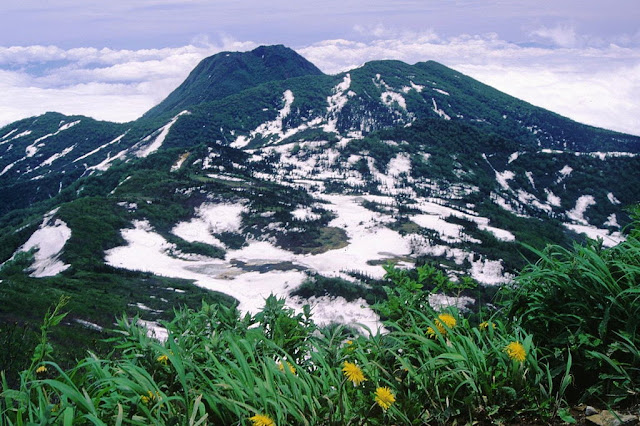 Photo by wikipedia
This is the Mount Myoukou and Sekiyama shrine protects this mountain.
In Japan,sacred nature is needed to protect by shine to avoid ruin.
People can't ruin the area if there are shrines.
Shrines are important points for nature protection.
This mountain has been known as sacred place
and many Yamabushi(Mountain priests) were training in the mountain.
Also,Sekiyama shrine was training hall for them.


That stick battle-like ceremony is called Bou-dukai.
One of the highlight event of the festival.
Those young men are called Kari-Yamabushi.(temporary-fake Yamabushi for the festival)
Old true Yamabushi people tried to protect self religion and Mount Myoukou against an attack
from Oda Nobunaga,a famous powerful samurai daimyo warload of Japan in the late 16th century.
So, Bou-dukai ceremony is a historical legacy.
Yamabushi people were practicing like that for defense.

Originally,Yamabushi was derived from ancient Hebrew people who visited ancient Japan.
(Photos)
Shinto is Japanese original religion but Judaism essence was added in ancient time.
But those two religions are not separated from the beginning.
Japan and Israel are man and woman in the Earth.
Many people don't know about it yet.
But some Japanese people already know that.
There are leader and second leader in every group.
Country,city,town,region,company,house...every group has two main people.
(President and vice president)
In the Earth,Japan has important place to worship the Sun and the Polaris.
In Grand shrine of ISE,there are two main shrines in there.
One is the place for the Sun.(Motherhood)
The other one is the place for the Polaris.(Fatherhood)
Those two places and sacred ceremonies in there are really important.
In Shinto,we Japanese especially worship the Sun goddess AMATERASU.
Meanwhile Jewish people worship the Polaris as a star of david.
Jewish people don't know that the star mark means the center of Universe.(= Polaris)

We Japanese have more than 85,000 Shinto shrines in Japan.
All shrines exist for the top shrine,Grand shrine of ISE.

After Bou-dukai ceremony,Mikoshi box is carried all over the town.
God of nature enter into the Mikoshi box temporally,
and local people spread the sacred power to their town for purifying.
People is shaking the Mikoshi to increase and knead nature god's divinity.

People are shouting like this "washhoi,wasshoi".
That is no mean in Japanese language.
That words are shouted only in Mikoshi ritual.
It is said that that words mean "Here comes god" in old Hebrew language.
Mikoshi was derived from the Ark of the covenant.
Of course,Mikoshi ritual is held all over Japan. 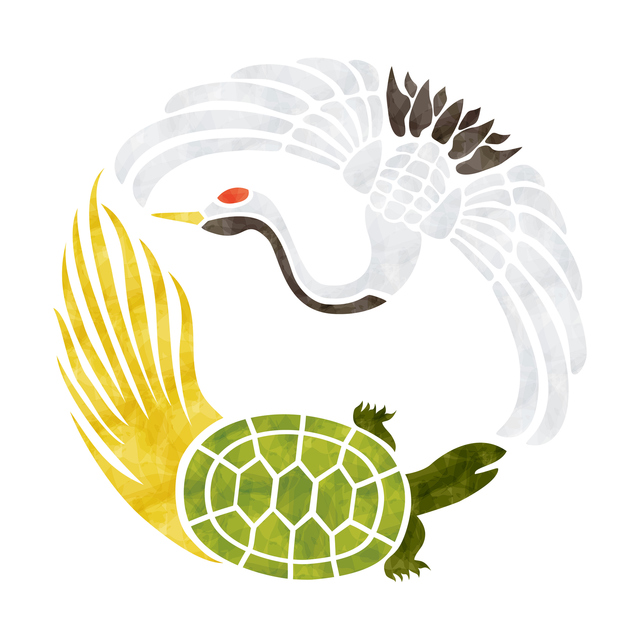 Crane and Turtle / Core concept of Japan / Amatsu and Kunitsu

photolibrary Crane and Turtle.  The combination is called "Tsuru-Kame" and known as a good luck symbol. Because one couple of crane love each other for a long time, and turtles live long. So, many Japanese buy Tsuru-kame gift for a happy event like a grandparents day or wedding.( Photos ) There are other important, secret hints in the sign. These are very core of Japan. Tsuru-Kame represents two opposite things that create new in the future. Yin and yang / Wife and husband / Japanese and Jewish / Settlement and Wandering / Worship and money economy Further more, Jewish are roughly divided into two groups. One group is for true worship. This group helped and protected Japan after WW2. ⇒ Japan and Douglas MacArthur / 1945 / Shinto The other group is for economic/war business. Many fake Jewish, Jewish traitors and being deceived Jewish in the group. It is a very complicated situation for people in Israel. Japan has almost the same nightmare. Many n 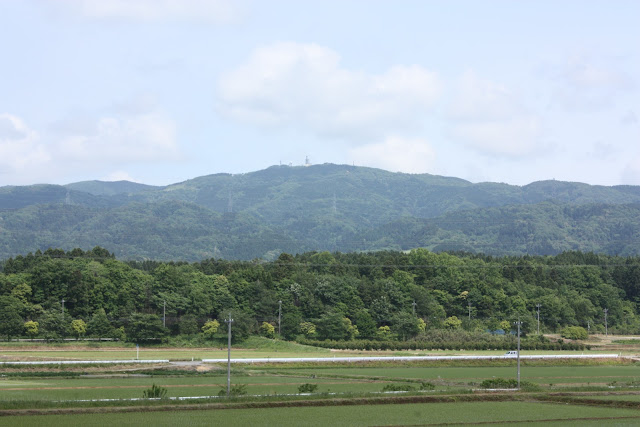 Picture provided by Houdatsu shimizu town Mount Houdatsu Houdatsu means "treasure arrives" Moses died around the mountain. He was almost 120 years old. → Japanese history about Moses / Ark of the covenant / Luchot HaBrit This place is called Kanan as nickname. Of course Japanese people don't know about the Old Testament. They are not interested in Canaan,the Promised land. They don't know even Shinto because we don't have education for religious things. Japanese people just dedicate thank to nature. Picture provided by  Houdatsu shimizu town There is the Moses legendary park in Houdatsu-Shimizu town. This park is created in 1993. Most Japanese think that it is just for tourism attraction. Picture provided by  Houdatsu shimizu town Three pillars mean a lot. Super ancient time,there were three sacred pillars in Mount Haku. It is called Hakusan worship now,and it was root of not only current Shinto but also other t 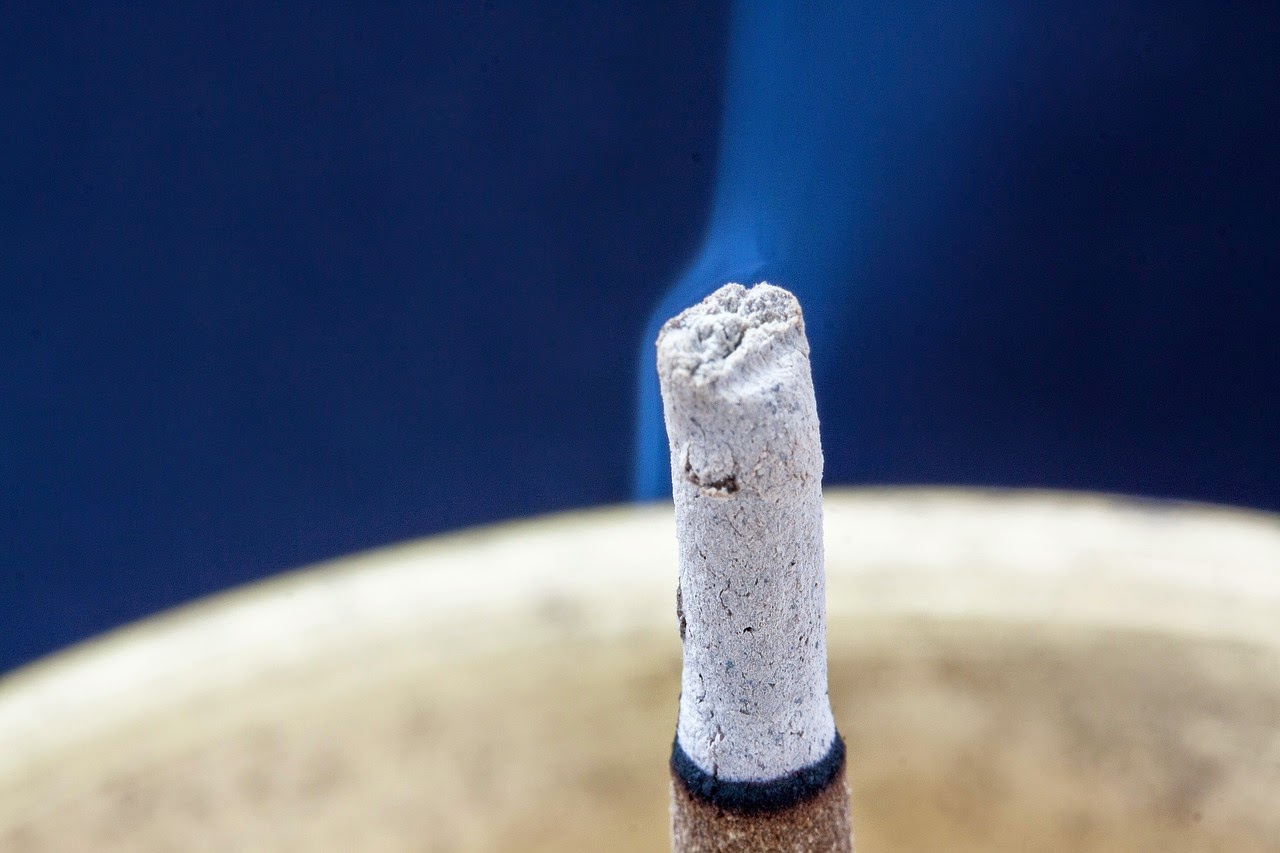 Butsudan / How to do / Japanese important daily ritual for ancestors

I would like to share Japanese style "effective and correct way" of ritual in Ancestor worship. This is a kind of white magic. There are many rules but basically, you just give three incenses everyday. Please save your ancestors. Their only chance depends on you. They have been waiting for your correct memorial service. Just thinking about your ancestors or visiting grave are not radical solution for them. Some ancestors do not rest in peace because of some reasons. Every family has troubled ancestors. To understand the truth, you need to know after life world called Anoyo. There are some levels in the after life world. ⇒ After life / 5 worlds / Integration plan If you leave suffering ancestors in severe places, that will influence on you and your descendant because your body came from all your ancestors. Ancestors are invisible now but your body's cells and DNA are still active. That means your dead ancestors aren't extinct. Their 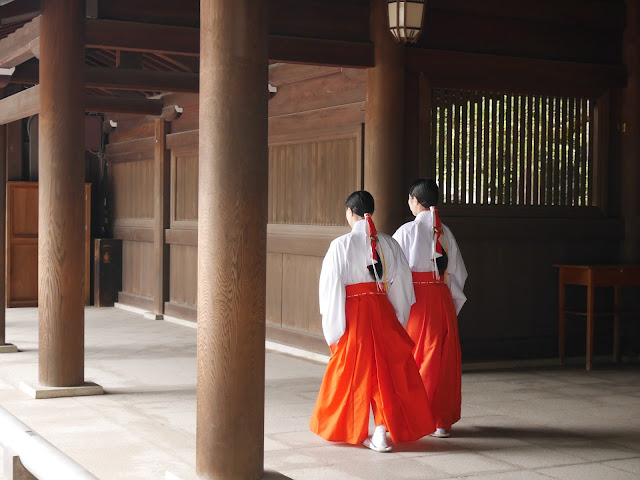 Miko  are young workers in Japanese shrines.(18 - 30 years old) They have lots of things to do. Cleaning,Reception,Preparation for Shinto ceremonies,Dance performance for ceremony, Making guide brochures,Amulets and gifts for guests...etc. Important thing is their hair. They have long,original black color hair to catch nature god's divinity. Hair become a perch tree for gods. This is called  YORISHIRO  phenomenon and it is very important Shinto concept. Japanese language is really interesting. There are many words that have same sounds. 髪 Ka→mi↘  (Hair) 神 Ka↗mi  (God or Gods) Pronunciations are different but these words have a strong similarity. I'd say Yorishiro phenomenon is a kind of temporary possession by invisible spirits(Both good or bad). Of course your body is also Yorishiro. Any things what have shape become a visiting place for  We need to take care of hair very well. Many good or bad spirits approach our body,especially our 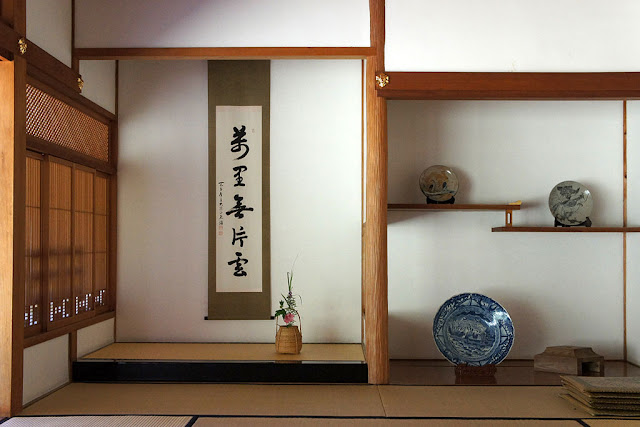 wikipedia The exhibition space in Japanese traditional guest room is called Tokonoma . (Left side one step higher place with a hanging scroll and flowers) Generally speaking,a room of Tokonoma is in north side of a house. Tokonoma is best place to install Kamidana(Nature worship table) and Bursudan(Ancestor worship table) . Because the room is always clean and silent. Photos / Kamidana and Butsudan in Tokonoma Kamidana example. Kamidana example. My Kamidana in US. My Kamidana is simple but very effective. Many people put extra things on Kamidana. To invite nature gods of your neighborhood,please do not put extra things. Because they can't visit there. One water bowl in the middle and a pair of plants are enough. These means one forest. Plus,if you in Japan,please get Ofuda at the nearest Shinto shrine from your house. About Ofuda(Condensed energy of Shrine,made of paper) Butsudan example. Butsudan example. There is a K 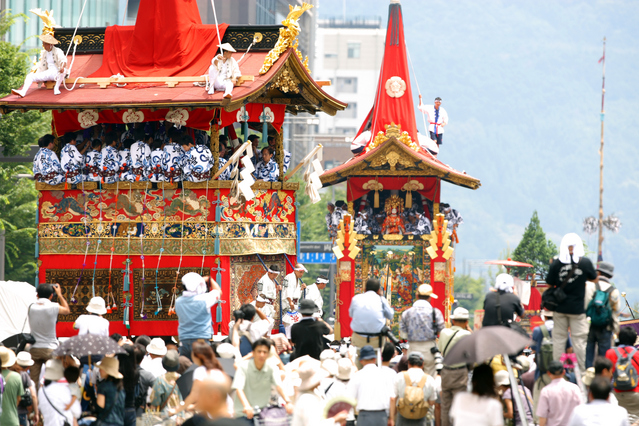 photolibrary Gion Matsuri of Kyoto is one of the biggest festival in Japan. This year, it is called off due to Covid-19. Gion Matsuri is a ritual of  Yasaka Jinjya shrine  of Shinto/Nature worship that have been held for 1,100 years. There are many same name shrines all over Japan but original Yasaka shrine is Kyoto's. YA-SAKA means like  "Worship" or "Seeing God" in old Hebrew or Aramatic language. photolibrary Yasaka shrine, Kyoto. God who protects this area is young Susanoo. ( Gozu Tannoh / Cow head king of strictness ) The Gion matsuri takes place for whole of July. The highlight is "Yamahoko Junko" held on 17 July. It is called a moving museum. photolibrary Above gorgeous vehicles are called hoko, dashi or hikiyama and so on. These all things are sort of Mikoshi.↓ wikipedia In summer or early autumn, many big shinto shrines perform each festival with Mikoshi. Mikoshi was derived from the 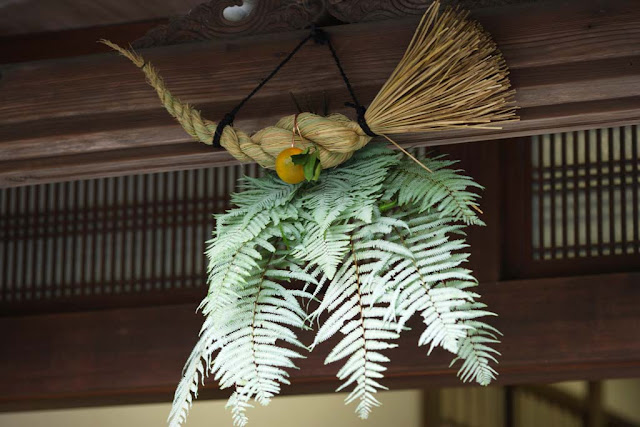 Photo by (c)Tomo.Yun Kyoto, Japan. This is a good Shimenawa-Kazari, Japanese new year's ornament. We put Shimenawa-Kazari on the entrance door around new year season. (After winter solstice to January 7) Do not display this ornament inside of an entrance or each room's door. Out side only. Because this is a strong barrier. Bad spirits hate Shimenawa-Kazari especially red things and thorn plants and they never invade a home or apartment's room. Citrus and rice straw absorb evils like a vacuum machine. On the other hand, sacred nature gods can visit the ornament especially on thorn plants. If you are in Japan, order true Shimenawa-Kazari on Amazon. Amazon Japan (Shimenawa-kazari) Or you will find Shimenawa-Kazari at every super market in Japan. But these are unsatisfactory to get good effects. Citrus, red color things, rice straw and thorn plants are important 4. Citrus means the Sun. Lemon, lime and an artificial plastic orange ball is al 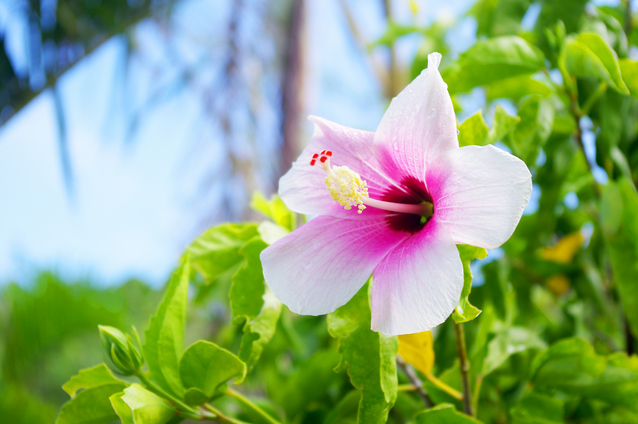 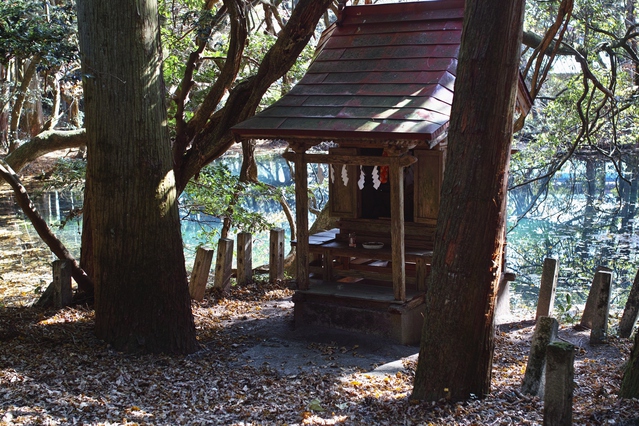 photolibrary That small shrine is called HOKORA . Hokora are smaller than regular Shinto shrines. Large  Jingu/Jinjya/Yashiro > Hokora > Smallest shrine  Kamidana in each house   Some ancient Hokora shrines are older than any other shrines. I think there are similar things in local worship of south east countries.   photolibrary photo by  photolibrary Local people often visit Hokora and "take care of it". Cleaning,changing water and dedicating thankful heart to nature fairy gods in there. photolibrary   photolibrary photo from wikipedia In Japan,there are so many places to worship nature gods. People are protected by nature worship includes ancestor worship. (Nature worship and ancestor worship are one because human is part of nature) Top of shrine is the Grand shrine of ISE .(Mie prefecture) It protects whole Japan and the Earth. There are two main worship places in the Grand shrine of ISE. One place for 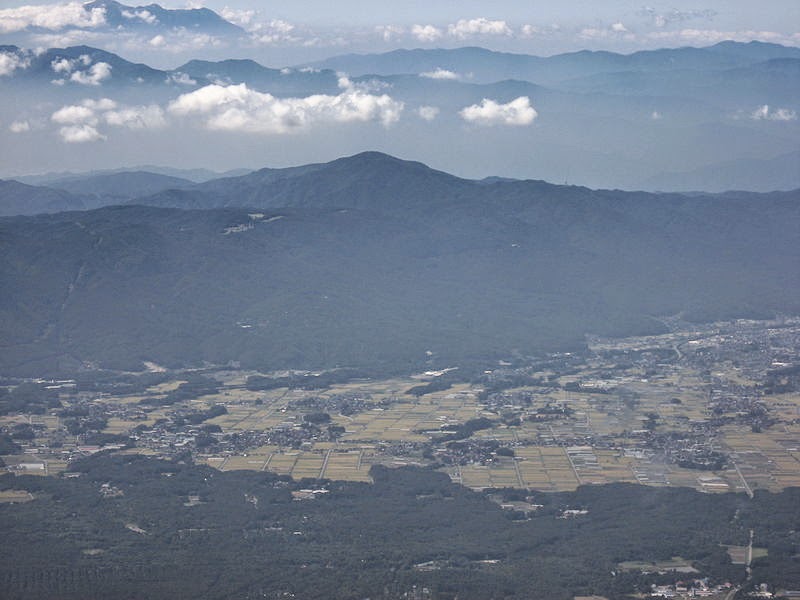 Sacred Mount Moriya in Nagano, Japan. There are one of the oldest Shinto shrines around this mountain. Suwa Taisha shrine  is composed of 4 shrines group. 4 shrines are divided into 2 groups. M = Mount Moriya AB = Shimosha group = Harumiya and Akimiya shrine CD = Kamisha group = Honmiya and Maemiya shrine ABCD = Whole Suwa Taisha Suwa Taisha have been protected by Moriya family line. 守矢(Moriya = Protects Arrow) Their ancestors were Mononobe family. They were most important priest position in imperial court. Mononobe family's root was priest who knows spiritual, practical techniques of old Judaism. And more ancient story, Mononobe's root was Nigiyahahi. He was first emperor Jimmu's loyal subordinate. In Japan, all shrines protect hidden secret nature place. It is called Goshin-tai.(God itself or God's place) So, shrine architecture is not real god place. True god exists behind or near a shrine. In case of Suwa Taisha, Gos